Today was a day of change. Change of plans, change of rooms, and change of schedule. We started off the day with the impression that we needed to be up at 6:30am. The day that was planned consisted of a hike, a trip to the Dead Sea, and ATV’ing in the desert. Instead, we found out that we didn’t need to be up until 8:00am because the hike closed due to unforeseen rainfall. After breakfast, Rabbi Klatzko gave a talk about having a conversation with an apple. On the surface, I can understand how that sounds strange, but ask your lovely children to explain what it means.

After that we had planned to go bowling instead of the hike, but suddenly we were allowed to go on the hike! So, we boarded the bus and headed out. After seeing some beautiful desert scenery, we boarded the bus to go ATV’ING. Wooooo!! It was a total blast and we all had a fantastic time. Unfortunately, we didn’t get to go to the Dead Sea which is often a highlight of many Israel trips, but Gam Zu L’Tova (everything happens for a reason). Love from the holy land!! 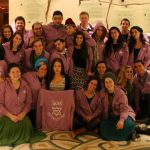 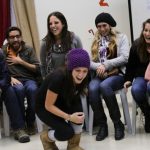